In addition to being a barrister at the Bar of England & Wales, David is a member of the Scottish Bar, having called as the Lord Reid Scholar 2016/17.

Prior to calling to the Bar, David was qualified as a solicitor in Scotland as well as in England and Wales. David’s principal areas of practice are taxation, chancery and public law. He also has significant experience of corporate and commercial disputes, including disputes related to insolvency. His experience spans both contentious as well as non-contentious matters.

Taxation
Prior to calling to the Bar, David worked as a solicitor at a large national firm whose focus was the provision of advice to high net worth individuals and family businesses. David’s focus in this area has continued following his move to the Scottish Bar and he has substantial experience in the provision of advice relating to personal taxation, including estate planning, and the taxation of trusts.

As well as advisory work, David is a commercially-minded litigator, regularly appearing alone as well as led at all levels of the courts and tribunals system.

David is very happy to provide advice and representation in relation to issues relating to trusts and succession. As a member of the Scottish Bar, he is particularly well-placed to provide assistance where these matters require consideration of Scots law as well as the laws of England and Wales.

As well as trusts and succession work, David is regularly instructed in commercial contract disputes (including shareholder disputes) and also has experience of insolvency matters, having represented both insolvency practitioners and those from whom property and payments are sought to be clawed back.

David is a capable and well-instructed public law litigator. He has appeared in a number of high-profile public law cases.

The Legal 500 ranks David as follows:

Administrative and Public Law: 'He is exceptionally bright, so is able to specialise in very technical areas of work, such as tax litigation. His written work and oral advocacy illustrate this intelligence. He is very precise and thoughtful when approaching each new piece of work.'

Commercial Disputes: 'David's skill is in distilling complex legal issues in such a way that they are accessible to both parties and the Court. In both consultations and appearances he is excellent at making clear and succinct points, while remaining mindful of the client's objectives in the litigation.'

Chambers and Partners 2022 says of David:

David Welsh is an advocate with a rising profile and an impressive client following. He is frequently instructed in a variety of commercial matters, including contractual disputes and cases touching on competition law.

Strengths: "A very experienced junior who is exceptionally well prepared for anything." "Really bright and can be used for a broad range of cases."

David Welsh is sought after by prominent solicitors to handle complex, high-profile challenges at an impressively early stage in his career. He acts for petitioners and respondents in judicial reviews involving questions of constitutional and commercial law, or the regulation of the professions.

Strengths: "A standout at the Bar in relation to Scottish public law." "The quality of his advice, his knowledge and his skills are way beyond his years."

David has a sophisticated taxation practice in which he tends to act for those challenging the decisions and powers of HMRC.

Strengths: "Easy to work with, and his advice demonstrated a very good grasp of the complexities of the Scottish tax system. Overall we found David to be technically excellent, commercial and responsive."

David sits on the board of trustees for the Edinburgh Dog and Cat Home and is the owner of a lively westie.

We don't have any client feedback for David Welsh at this time.

An updated selection of David's cases and publications can be found here: https://axiomadvocates.com/advocates/profile/david-welsh https://www.exchequerchambers.com/ 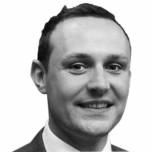